Reproduced from the Autumn Catalogue 1980

Three people who shared this view were sufficiently motivated to actively combat the proliferation of billboards and came together in October 1979 to discuss the possibilities of a more united effort, thus B.U.G.A. U.P. was formed.

Basically B.U.G.A. U.P. arose from the need for mutual support and collaboration amongst billboard graffitists. There was no conscious decision along any political line, just the recognition of a common aim; to combat the inhuman corporations who manufacture tobacco, alcohol, fast foods, soft(?) drinks, etc, their sole aim being to profit from the sale of those unhealthy and wasteful products. It also meant that if one of us was apprehended there would always be someone from the group able to bail the other out. The number grew to the point where there were at least seven activists in the Sydney metropolitan area. There are other people active besides us, and there's been an increase in billboard graffiti unconnected with B.U.G.A. U.P. in the early months of 1980, with graffiti appearing in Wyong, Newcastle, Brisbane and Melbourne. The well publicised case in Melbourne recently in which a doctor was charged for graffiting on a tobacco billboard points to the increasing acceptance of this type of action by the community.

From that time then, we started 'signing' the billboards we graffitied with'B.U.G.A. U.P; which remained cryptic until we 'seized' our first blank billboard on Parramatta Road near Sydney University on christmas eve 1979. We used ladders to paint across the whole billboard: B.U.G.A. U.P. - BILLBOARD- UTILISING GRAFFITISTS AGAINST UNHEALTHY PROMOTIONS, you con support us. From that time people became aware of a group and the 'signature' on each billboard has become more meaningful. Also due to the co-operation (and the feedback we've received) the type of graffiti we write has changed . . . we all effect each other.

What we are trying to do with our graffiti is to expose the devices the advertisers are using to exploit us - demystifying their process. The advertisements use two main ways to promote their products, sexuality (both male and female) and insecurity.

They do that by setting up a situation (visually and verbally) where the viewer is made to feel somehow insecure or inadequate, and then imply that by consuming the product they can be saved from the terrible situation in which they find themselves. The billboards say 'all you've got to do is buy this product and you'll enter this' terrific fantasy'. The product can no longer exist without the fantasy.

Many of the messages we write are determined by the billboard itself; the space available, the wording and how they lend them- selves to addition and alteration; most easily seen in the claridge, escort and dunhill billboards reproduced in the catalogue. This does raise the question of whether graffiti just makes people notice advertisements that they would not normally, but the very danger of billboards is that people don't consciously acknowledge them. The danger here is twofold; firstly it means that these ads work virtually subliminally which is really bad news, and secondly it means the advertisers can push whatever they like and no-one is going to challenge their 'legal' right to impose as much visual pollution on us as they want to.

We think graffiti's function here is vital - firstly it makes people consciously aware of the ad, secondly the graffiti makes obvious, usually in a humorous way, the latent undertones of the advertisement itself. This is most obvious in the 'masturbation fantasy' of the kb beer ads. It's all there in the image of the ad - their can of chemical crap has inserted itself between the two hands. The last vestige of unobstructed human contact, especially between men, has been done away with - now, uninhibited male contact is only possible via the medium of beer, in this case by consuming a maximum amount of cans of kb - drinking with the boys not only at the pub, but everywhere.

Another important thing to realise is that most of the bill- boards are on Public Transport Commission property, ie on government property. We've got the situation where the Common- wealth and State governments are encouraging the promotion of products they themselves recognise as being unhealthy. This absurd contradiction is most apparent on the trains. Smoking is banned on trains, so that 70% of passengers don't have to share the kamikaze instincts of the smokers and yet these trains roll past tobacco billboards, macho-alcohol billboards, macdonalds billboards, coca cola billboards, and all the other unhealthy promotions we are opposing - it's completely crazy.

As one activist points out: 'They promote a drug that's killing 40 people in Australia each day and the law protects them. I write on their ad how many people are dying from tobacco-related diseases and I get charged with malicious injury (to a billboard!). Anyway the law used its power to try and hurt me with a fine and compensation, which they probably imagined would be a deterrent. I merely cut out the fines by going to gaol for a few days.'

We do however believe in minimising the risk of apprehension; to avoid not only the loss of 'time and money' but also the hassles of the legal system.

Each activist has their own particular method of doing the job; some are quite spontaneous, while others usually plan what they are going to write and which billboards they're going to reface in a given time. When on the job, a phantom painter usually carries three spray cans; black, red and chrome. Additional colours are used when necessary. It doesn't take long to be able to write quickly whilst avoiding spelling errors, the embarrassment of any graffitist. Ladders are used if an appropriate vehicle is available, and sometimes it's possible to climb up the back of the billboard structure and work from the top; upside down writing with a spay can is an experience that has few comparisons. 3 to 10 bill- boards can be done with each spray can (250 g being the best size) and 20 or so can be done in an outing for reasonable expense. Billboards altered in the city have a life span of between one day and six weeks. Those on PTC property seem to stay for three to four weeks, while those in the country tend to stay there for months. 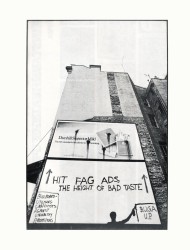 The people who've been involved in the campaign have been teachers, printers, artists, students, truck drivers and health workers and have varied in age from 15 to 55. It has hardly been a homogeneous group due both to their differing backgrounds and motivations. The prime reasons for painting on billboards include repulsion of tobacco smoking and promotion, direct political action against corporate 'legal' drug-pushers, and concern for our visual environment. But a united homogeneous group was never the aim, and the differences of opinion have been potentially divisive but ultimately fruitful. We all agree at least on the necessity to graffiti on the very advertisements that assault us daily and threaten a sane and healthy future. 'It seems natural to use this system against itself.'