Reproduced from the Spring Catalogue 1981

NOT A GROUP, A MOVEMENT 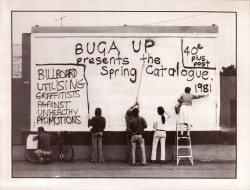 A lot of paint has sprayed from the can since the inception of BUGA UP in October 1919. Since then we have distributed over 30 000 copies of our 1980 Autumn Catalogue, and the number of graffitists actively involved in BUGA UP has grown from three, working in the inner city of Sydney to about a hundred, working in five of the six states of Australia NSW, Victoria, South Australia, Western Australia, and Tasmania. As a follow-up we produced the 1981 Spring Catalogue.

People from 8 to 71 years of age are now active in BUGA UP. These include entire families, and people from over thirty different work areas carpenters, domestic and health workers, graphic artists, hairdressers, taxi-drivers, a wrestler, journalists, students, pensioners, research and metal workers, kindergarten teachers, technicians, public servants, unionists and clergy to name but a few!

Originally the BUGA UP campaign was broadly aimed at all unhealthy billboard advertisements. However, in response to public opinion we soon focussed our attention on tobacco and alcohol promotions.

SUMMER OFFENSIVE
SOME ARE OFFENSIVE!

BUGA UP held its first public meeting in Sydney, in October 1980. Despite the fact that it was poorly advertised (there were very few blank billboards around at the time) over fifty people attended. We showed slides and discussed our work, and most importantly, recruited new graffitists.

Having doubled our numbers, we launched our first organised "offensive" the BUGA UP Summer Offensive. The plan was to graffiti on all tobacco and alcohol billboards on government (public) property in Sydney several hundred billboards.

We felt then, and still feel, that the hypocrisy of the NSW State Government is particularly intolerable and demands immediate action. lts own Health Commission recognises that up to 40 people per day in Australia, die from tobacco and alcohol related diseases. Each year, the Health Minister outlays millions of dollars (taxpayers money) on caring for those suffering these diseases. Yet over 50% of tobacco and alcohol billboards and posters are on government property that is on railway stations and on the sides of buses.

ln the Offensive, graffiti such as "Health and Transport Ministers the Real Drug Pushers", "P.T.C.* Promotes 7-erminal Cancer", and "Government Killboards", highlighted these contradictions and sought to embarrass the government which claims to be "actively discouraging the use of any drug". (Neville Wran, City Extra, ABC Radio, 9/81 ). * Public Transport Commission

The public support that emerged from the Summer Offensive prompted us to establish an official postal address in February 1981, so that people wanting to "lend a can" for the movement could become involved. ln addition to this, the occasional "brush" with the Law led us to organise a Fighting Fund.

Through an appeal in a national weekly newspaper, and by utilising several blank billboards, we called for financial help. Cheques ranging from $1 to $100 were sent (and are still being sent). This money has been used to buy equipment, publish material such as this catalogue, and to pay half the fines of any graffitist unable or unwilling to go to gaol. The graffitist pays the other half as incentive not to get "court". Money sent to the Fighting Fund isn't used to pay for legal representation, or to pay "compensation" to legal drug-pushers.

BAIL AND JAIL,
FOR WHEN YOUR RUNNING SHOES FAIL

Two years, and many thousands of billboards later, Sydney BUGA UP has had only 21 arrests. Of these, only 13 people have been convicted of "Wilful Deface" or "Malicious Injury" (to a billboard).

What about the Malicious lnjury to community health and the Wilful Deface of our visual environment caused by billboard promotions!

Neither the government nor the law courts will answer this question. While they continue to protect corporate vandals by their silence, ordinary people like us will be forced to speak up on the billboards.

Six people have continued speaking all the way to gaol, deliberately refusing to pay fines imposed by the Courts. On one occasion the graffitist's cellmates quit smoking. The advice of another graffitist, on paying fines is "Go directly to gaol. Do not pass the buck. Do not pay $200" the average fine imposed on convicted graffitists.

SPEAK UP, ACT UP, BUGA UP

After two years hoping BUGA UP would just die out, the Outdoor Advertising Association of Australia launched its first major campaign in an effort to swing public support away from us. OAAA and some "anonymous" advertisers committed $75 000 worth of advertising space and skills, in Sydney and Melbourne, to the Lions Club "Speak Up Against Vandalism" campaign.

The manager of a major outdoor advertising company, Australian Posters, stated that their contribution to the "Speak Up" campaign was a response to the "unwarranted publicity our friends from BUGA UP have been getting." (Sydney Morning Herald 3Ol7 181 , p.2).

Surprise, surprise, the "Speak Up" posters have been placed predominantly on sites leased by tobacco and alcohol companies. Guess who is really footing the bill.

"Anyhow, have a . . . ." You know the rest and so do almost 100% of 13 year-old smokers who have taken part in extensive health surveys in NSW and WA. The results show that children are directly influenced by cigarette advertising. So much so that over 50% of kids who smoke "choose" Winfield nearly double the proportion of adults. Nearly all the rest smoke Benson and Hedges, Alpine and Marlboro.

These brands, more than any others, promote images which appeal to young people. Alpine promises the "gateway to womanhood", sexual activity and confidence; Marlboro promises freedom, potency and masculinity; Benson and Hedges sophistication and status; and most insidiously there is the nonchalant, ocker confidence and fatalism of Winfield's "Anyhow".

Health awareness amongst adults over 30 has meant an increasing number are cutting down, or stopping smoking altogether. Cigarette companies are replacing this lost revenue by redirecting their advertising . . . towards children, 75% of whom are unaware of the associated health risks. (M. Swanson, WA Health Education Unit, Western Mail,11l7 181).

The four brands mentioned here are all advertised on billboards, and although their images are particularly powerful, they are very susceptible to BUGA UPing.

Beyond the billboard campaign, our work with kids has extended into primary and high schools where we have given talks and shown slides of refaced billboards. Kids don't seem much interested in listening to a white-coated doctor lecture them on the evils of smoking and drinking. lt goes down like a graffitist on a broken ladder!

Instead our credibility with them is established by anecdotes about billboard graffiti, police and gaol. The interest and dialogue this creates then provides an excellent forum for discussion about the health aspects of smoking and drinking, and the ways in which they can resist the pressure of advertising and peer groups. Some of these kids, in consultation with their families, have become active in BUGA UP.

CONSUME RS VS. CORPORATIONS
WHAT THE HECK, WHY DON'T WE HAVE A REVOLUTION?
WHAT A STIRRING IDEA! 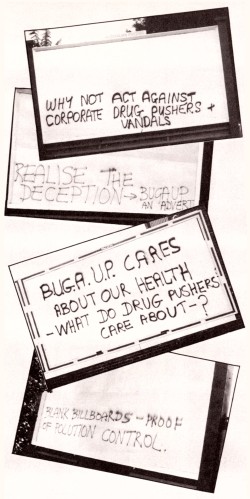 Advertisements are one-way communication specifically designed to influence us as consumers. Nowhere is this more obvious than with the ugly billboard advertisements which saturate our environment. The products pushed in these ads are often useless or positively harmful to our health. Yet, as individuals, without corporate resources, we have no effective legal right of reply if we object to the products themselves or the way in which they are promoted.

lnstead, the companies are free to regulate themselves and do so in their own interest. For example, it took almost two years legal lobbying of the industry's self-regulatory council before it deigned to remove Paul Hogan (an acknowledged children's idol) from Winfield ads. However, true to form, it took this same council only ten days to remove the State Government's Healthy Lifestyle promotions following a complaint from a tobacco company's advertiser. lt's enough to make you want to paint on a billboard and BUGA UP their system.

Billboard graffiti begins a process of two-way communication, creating a dialogue where before there was only an instruction or threat that if we didn't live their lifestyle of booze, fags and mass consumption we were somehow inadequate. Take a look at the ads for LA beer and Sterling cigarettes for example.

Sterling invites us to join the elite world of the "idol" rich the cigarette for the person who has (or is that wants?) everything. You know, those little everyday comforts, like the Ferrari with the 250 kph capacity for those beastly peak-hour traffic jams on the Harbour Bridge; the ocean-going yacht for your Sunday perve at Lady Jane Beach; and of course, the glider for doing the weekend shopping. Compare this scenario of tobacco-touting trendies with the cultivated ocker ordinariness of the ads for LA beer.

The introduction of LA (Low Alcohol) beer was heralded by the breweries as a gesture of their responsibility to the community. We were promised there would be fewer drink-drive accidents and less (or smaller?) beerguts. lnstead Tooths turned social responsibility on its head in the quest for bigger profits. "You Can Stay With Tooths LA" we were told "Pay More, Piss More, Spew the Same" as the refaced billboard soon read. Prove your ocker manhood by being a stayer. No need to feel any more guilt about "one more for the road" Tooths has said it's OK.

BUGA UP is fighting companies whose operations span continents and whose annual turnover rivals the Gross National Product of many countries. The power and money that these multinational corporations command is enormous but so is the power of consumers. For example, it has been calculated by the NSW Health Commission that if every smoker gave up one cigarette per day, it would cost the tobacco companies $40 million per year. With this money Australian smokers could buy 20 million spray cans 5 for every smoker in Australia. So stub a butt and put your "tinnies" to work Speak Up, Act Up, BUGA UP!